Let me preface this story by saying that I haven’t been diving in over twenty years.  I received my Divemaster’s certification when I was 18 and by that age had logged well over 100 dives and many hours underwater.

The last time I was diving, my wife was my girlfriend.  I took her diving in the pool just so she could try it.  Wasn’t her thing, but for some reason I still kept her around…

This year was my time to get back in the water.  I did some research and found a dive shop in Wolfeboro aptly named “Dive Winnipesaukee”. They did both Friday evening and Sunday dives.  I decided a single dive to get my feet wet (no pun intended, but hey it works!) would be the best way for me to get restarted, so I opted for Friday.

This wasn’t just any Friday, this was a Friday set up for adventure!

An adventure is a trip/event when the outcome isn’t fully certain.  I headed into Wolfeboro on the day of a street fair.  There was no parking to be found, a dive shop I have never walked into (I had called and reserved ahead), and heavy wind, hail, flooding, thunderstorm warnings blazing over the radio.  This would certainly classify as an adventure.

I did finally find parking only a block away.  Headed into the shop and filled out my paperwork.  Grabbed my gear as it rained on my head and walked down to the boat.  There would be 7 divers that day that paid to be there along with two guides.  Arthur was our guide and boat captain.  His Germain accept was fun to listen to and his demeanor well intentioned.  He was ready to head out onto the lake but the lightning across the way said otherwise.

We sat on the boat and while those of us paying to be there questioned if we would actually go, Arthur was all but certain of it.  “Oh we’ll go!”  he would say.

True to his word, we did.  After waiting 45 minutes for the sky to clear up and the thunderstorms to stay to our left, we took off for adventure!

Due to the storms, we didn’t go that far.  I actually can’t recall the name of the point or wreck, but in 30 to 40 feet of water, we anchored and dove in. 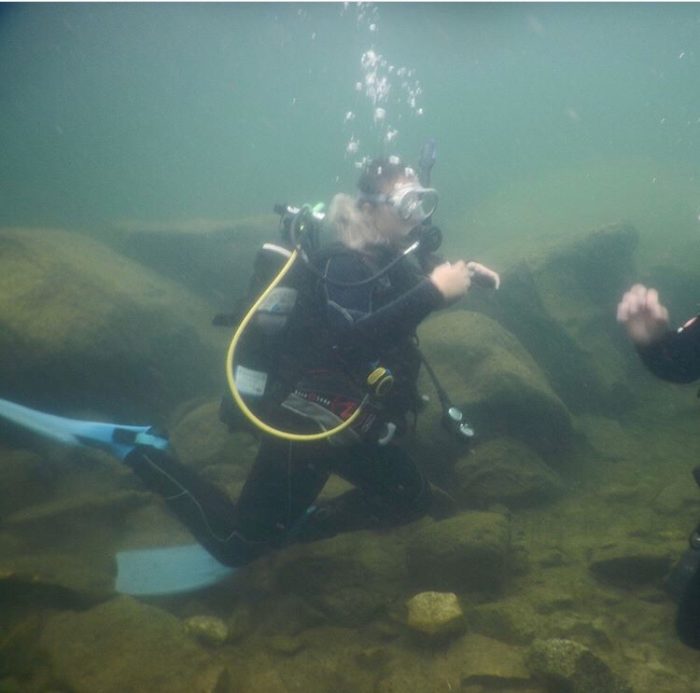 Lake diving is very different than ocean diving.  The visibility is much lower, the temperature is much colder (versus caribbean diving that spoiled me in my younger years) and I just felt like I had so much to try and recall.  It all came flooding back though and it was as if I dove only a week ago.

The wreck was a small boat tender, or known as a dingy, that was colored like a bumble bee with yellow and black stripes.  Someone even drew a bumble bee caricature in the lake slime that covered some of the boat.

We spent roughly 35 to 40 minutes underwater mostly at 30 feet.  The 35 foot depth at that location marked the start of the next thermocline.  That’s the level where anything under that depth the temperature would drop drastically.  It easily felt 10 degrees lower anytime you went below 35 feet.

Upon returning to the surface I was expecting it be to down pouring, but while the sky remained cloudy, the rain mostly held off while we headed back to shore.

I had a great time and would highly recommend them. Im going to try and make a few more Friday dives before the year is out.